EuroSun 2022 will take place on the campus of the University of Kassel, Germany and will be hosted by the Department of Solar and Systems Engineering.

The City of Kassel is located about 1,5hrs from Frankfurt and is world known for being the host of the art exhibition documenta, it's UNESCO world heritage site Mountain Park Wilhelmshöhe.

The University of Kassel is a young, modern and vibrant university with numerous fields of expertise in nature, technology, culture and society. With more than 23,000 students and approximately 1,800 scholars, among them more than 300 professors, the University of Kassel is one of Germany’s mid-sized universities. It plays a key role in the development of the northern Hessen region, but its profile also attracts many students and scholars from across Germany and abroad.

The congress venue CampusCenter at the University of Kassel was awarded the German Facade Prize 2015 for its striking and pictorial design. With a usable floor space of around 4,900 square meters, the impressive building integrates six lecture halls as well as six seminar rooms with around 2,700 seats. Due to its open atmosphere and close proximity to the university's central cafeteria, the building is ideally suited for events such as congresses and exhibitions. 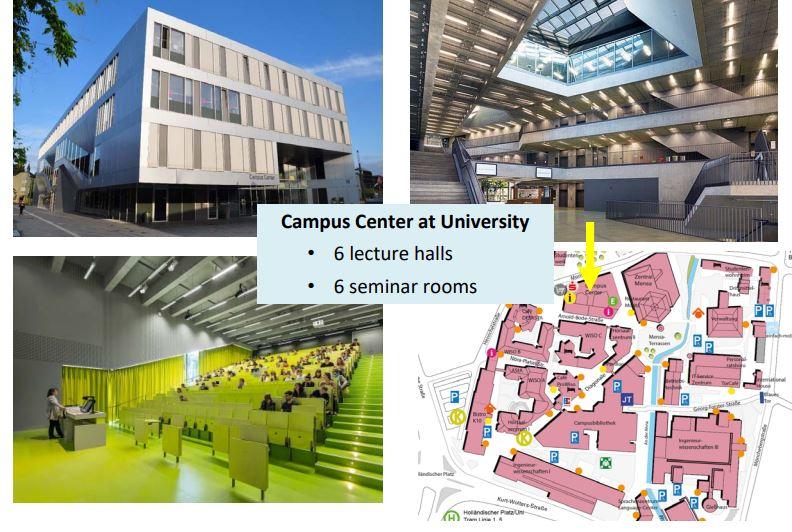 When planning your trip to Kassel, please make sure to regularly check the COVID-19 entry and quarantine regulations in Germany - please find them here.

Kassel is about 1.5 hours by train from Frankfurt Airport. A direct train departs from the airport and arrives at Kassel-Wilhelmshöhe station at regular intervals. There are also train connections from Hamburg, Frankfurt or Munich. All stations in Kassel have good local and public transport connections.

Special EuroSun 2022 Train Ticket: As a special offer for our EuroSun 2022 Attendees, we have secured special event tickets for you when traveling to Kassel by train. These tickets are a best price offer by the German Railway - learn more and book your ticket here.

The most convenient way to reach Kassel by plane is to fly to Frankfurt Airport. Kassel is about 1.5 hours by train from Frankfurt airport. A direct train departs from the airport and arrives at Kassel-Wilhelmshöhe station at regular intervals. You can find the departure times at http://www.bahn.de.

It is also possible to fly to Berlin, Munich, Hamburg, Leipzig or Cologne and to take a train to Kassel from there.

How to get to the conference site by tram and bus:

To reach the EuroSun 2022 congress site, please travel to the following tram stations:

Alternatively: Tram line 3, 4 or 7 to stop "Am Stern", change there to tram line 1 or 5 or walk the short distance to Holländischer Platz.

From Kassel-Wilhelmshöhe (train station) take tram line 1 in the direction of Holländische Straße/Vellmar to the stop "Holländischer Platz - Universität".